Here’s a short note about the Fast Frequency Response (FFR) rule change draft determination that the AEMC released at the end of April. This is in response to a rule change request from Infigen which outlines the need to address power system risks due to falling levels of inertia, and suggests a mechanism to procure a faster contingency response than is currently procured in the spot market. 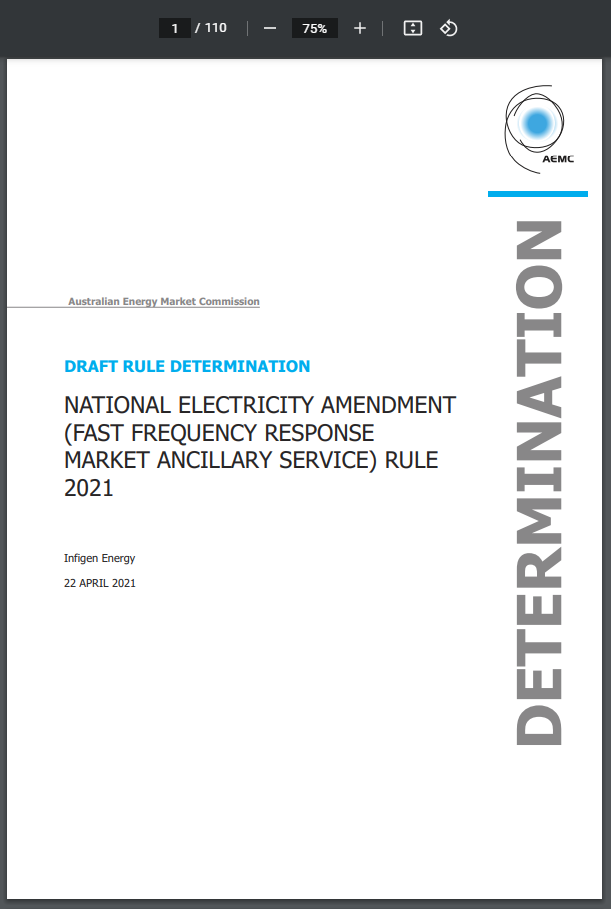 The proposed drafting of the rule change is very simple – just inserting “very fast raise/lower service” in a few places.  The fine detail of exactly what the service would look like will be defined by AEMO in the Market Ancillary Services Specification (the MASS). The MASS is currently in a consultation process (for matters other than this rule change, including simplifying and clarifying the document) that started prior to this rule change draft determination.

The AEMC’s proposed timeline is to have the MASS updated in 18 months and the market system changes done in at most 3 years.

So what is FFR / the Very Fast service? Here’s a summary quoted from the draft determination:

FFR generally refers to the delivery of a rapid active power increase or decrease by generation or load in a time frame of two seconds or less, to correct a supply-demand imbalance and assist in managing power system frequency. FFR is a relatively new service that can be offered by inverter-based technologies such as wind, solar photovoltaics (PV), batteries and demand-side resources.

And my summary of what this new very fast raise / lower service is not – though AEMO will need to consider the interactions between these:

Power system security itself isn’t the reason for the rule change right now – it’s minimising the cost to consumers, a key objective in AEMC rule-making.

Following a contingency event power system frequency can change rapidly, especially in low inertia conditions, and limiting how far it falls (the “nadir”) is critical to maintaining power system security. The AEMC explains that AEMO could currently limit this nadir by sourcing increasingly large (and potentially expensive) quantities of the existing Fast (6 second) services during low inertia conditions. The AEMC finds that the alternative of an optimal dispatch of a combination of Fast (6 second) and the new Very Fast services would deliver a more economically efficient (lower cost) outcome.

A quick look back at the AEMC’s Final Determination on Five Minute Settlement.

The ongoing (second) outage at Loy Yang A unit 2 is a timely reminder of the need to progress the 2 rule change proposals submitted by ERM Power with respect to MT PASA data duration, and granularity.

2 Comments on "FCAS goes from fast to very fast"