On Wednesday I posted this initial review of our high-speed frequency reading from postcode 4064 in Brisbane.  In this article we will briefly update and extend as follows:

(A)  There were actually three frequency events that afternoon

An eagle-eyed reader of the last article pointed out to me that there were actually three frequency events during the afternoon – which I have shown here in an updated chart: 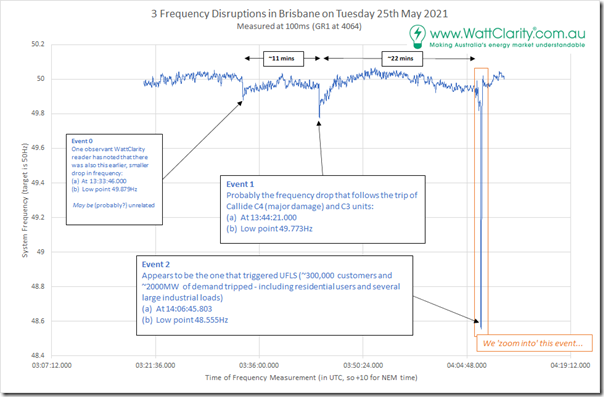 You’ll note I have labelled them Events 0, 1 and 2 as follows:

Thanks for identifying this, NB (and I note Josh Stabler spotted this here)!

I’ve labelled this ‘Event 0’ as we had already numbered the other two, but also because it is possible (indeed probable?) that whatever caused this drop down was unrelated.

Do readers have any idea about what happened to cause this?   I have not yet had time to look…

As discussed already, this is when Callide C3 and C4 tripped (perhaps with C4 actually tripping before C3 … but we’re still looking into that, to see what we can see).

As discussed already, this is when Callide B2 tripped, along with 3 units at Stanwell (to house load) and 1 unit at Gladstone (and Allan also identified that Yarwun Cogeneration also tripped at the time).

(B)  It seems QNI separated for ~20 seconds during Event 2

In this next section, we’ll take a closer look at what we can see, in terms of system frequency, for Event 2 (the big one).

We’re having another look for several reasons, including:

1)  We’re also in the process of reviewing the AEMO 4-second data (which has been causing a bit of confusion on twitter and LinkedIn, we noted yesterday).

2)  We’ve also been receiving a variety of frequency traces from an evolving crowd-sourced approach, whereby a variety of readers are providing us with data from their own solar or battery inverters at a range of locations across Queensland (thanks to everyone individually – and also to Solar Analytics for a large data dump from a few thousand). 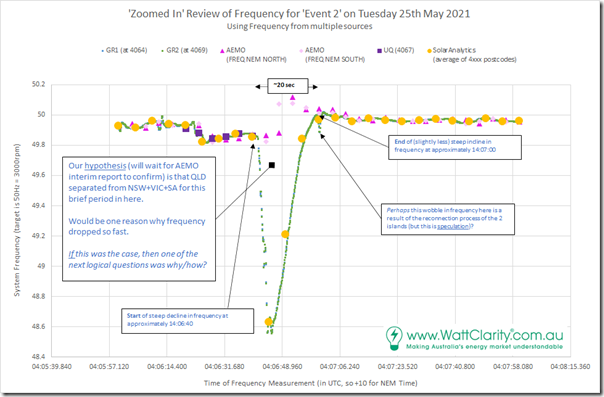 It’s pretty clear to us, from the above, that…

(B1)  AEMO’s ‘NEM North’ in this instance, was not measuring QLD

As I noted on social media (some links above) that there were a number of people starting to dig into the AEMO’s 4-second data, which is used for the primary purposes of Regulation FCAS ‘Causer Pays’ calculations.

In the data file, the AEMO publishes 4-second frequency readings for 3 locations … and it’s entirely understandable that people conclude that the data set labelled ‘NEM North’ is frequency measured in Queensland somewhere (a logical guess would be Brisbane).  However that is not always the case.

Indeed, I have a vague recollection that the measurement of ‘NEM North’ can be switched to Sydney on occasions (don’t recall the specifics – and my memory might not be correct) – as it was a factor in some of the counter-intuitive outcomes out of the Double-Islanding event back on 25th August 2018.  Don’t have time to dig into the details now, but it was around AGC signals being sent to QLD Generators supplying Regulation FCAS that asked them to move one way (based on the use of Sydney frequency) whereas the QLD frequency was calling for the opposite direction of support.

Obviously flags the desire to be able to use a greater number of sources in the data set, and the operational systems, but my vague recollection is that there’s some limitation in the EMS.

Understanding the above (remember – our hypothesis, at this stage) if seems quite likely that Queensland was separated from the southern NSW+VIC+SA frequency island (TAS is somewhat separate because of the DC nature of Basslink) for a period that we hypothesise was about 20 seconds long, as shown in the chart above.

Assuming that this was the case, then it does lead to some interesting follow-on questions and observations:

(a)  The (temporarily) islanded QLD grid would have had a much lower level of latent inertia present in the system:

i.  Because of loss of support from the south; and

ii.  Particularly after Callide B2, Gladstone  2, 3 and 4, and Yarwun all tripped offline completely;

(b)  This lower level of inertia would have increased (significantly!) the ROCOF … hence the steep decline in frequency.

(c)  Should not need to be said, perhaps – with the ‘[SOUTHERNERS] saved the day’ argument going on, worth noting that nothing south of the border could have helped (or hindered) QLD’s recovery for the ~20 seconds after the QNI interconnector separated.

(d)  This also helps to answer the (numerous) questions I have seen about why all the UFLS was occurring in QLD – with a bit in northern NSW, presumably because of where the disconnection point was on QNI.

For those who are new to FCAS, or a bit rusty, Jonathon’s article will help.

ii.  even though the separation event appears to have only been 20 seconds long, that would have been 5 or 6 pulses of AGC signals.

My sense is that it’s a wonder the lights did not go out across the whole state, and will look forward to understanding what brave decisions were made to help it remain (mostly) together.

We obviously don’t yet know why the interconnector tripped, but it does seem to be (if our hypothesis is correct) a big determinant on what happened!

South Australia islanded from the eastern part of the NEM overnight

South Australia was electrically islanded from the eastern part of the NEM for a number of hours overnight. Here’s a quick (early morning) look at some of what happened.