This morning I awoke to another weather alert for ‘strong winds’ … and there were also news reports of localised power outages* in northern NSW as a result of the same ‘Antarctic blast’ weather pattern.

So I opened up this trend query in NEMreview v7 to investigate what was the aggregate production level across the NEM: 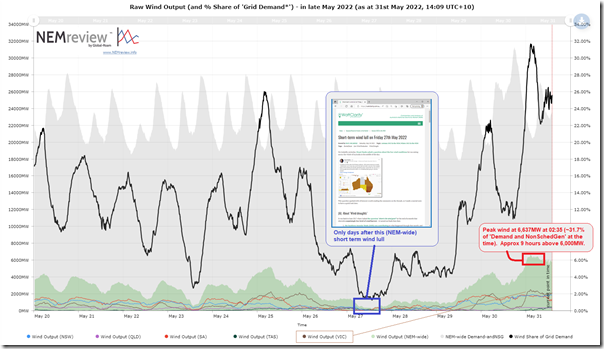 The headline result was a peak production early this morning (InitialMW for 02:35 Tuesday 31st May … which means FinalMW (i.e. metered) at 02:30) where the level reached 6,637MW.

A couple points to note here:

1)  I recall posting about the ‘Yin and Yang of Wind’ back in September 2015 and there’s a perfect illustration of this in the chart above, with the new maximum point on Tuesday 31st May coming only only four days after this ‘short term wind lull on Friday 27th May’!

2)  We all know how ‘Underlying Demand’ is lower in the early hours of the morning – and this carries through to ‘Grid Demand’ as well, but it’s worth noting that this wind production represented approximately* 32% of Grid Demand at the time:

Note that AEMO more typically uses ‘Operational Demand’ as the measure for ‘Grid Demand’, but that data is only published on a 30-minute timestep, so can’t be

3)  The record NEM-wide was driven with VIC wind production the largest share (above 2,000MW) – closely followed by SA and NSW neck-and-neck just below 2,000MW, with QLD a long way behind and TAS brining up the rear (in this case).

It’s only when posting this longer-term trend of monthly wind stats a couple days later that I note I posted the above too soon … in that the wind really cranked that same afternoon:

2)  as per the above, it was the Victorian region that contributed the largest share

It’s 1st April 2022, and I have not checked these stats in NEMreview v7 for a while, so I thought I would have a quick look at how  a number of the key stats are trending: Quick notes about statistics:…

Updated long-range trend of monthly wind statistics (maximum, average and minimum) for the end of May 2022

An updated longer-range trend of monthly aggregate wind statistics (MAX, AVE and MIN per month) to 31st May 2022 … incorporating the new all-time record.

The all-time record for ‘peak wind’ continues to climb, with a Sunday evening contribution pushing it higher again.