Whilst I am striving to focus on continuing the finalisation of GenInsights21, the market keeps throwing up ‘interesting’ distractions.

First it has been the incessant stream of SMS alerts from ez2view notifying me to the ongoing pricing volatility in the QLD region, and sometimes NSW as well.  This I documented briefly earlier today in Part 1 and then Part 2 … but the real story will be more visible (time permitting) with more data published tomorrow.

Now Mark Ludlow’s pointed me at Jarrod Whittaker’s tweet at 15:02 about a fire at the Yallourn power station coal bunker: 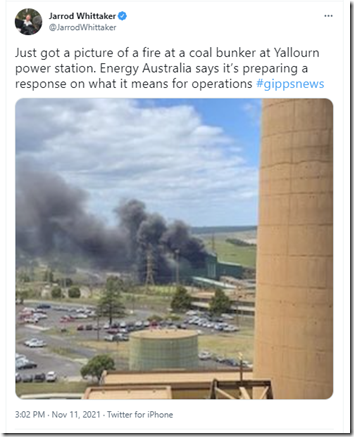 (A)  A quick look, in our ez2view software

Quickly mashing two widgets together in ez2view at 15:55 today, we can see some further details: 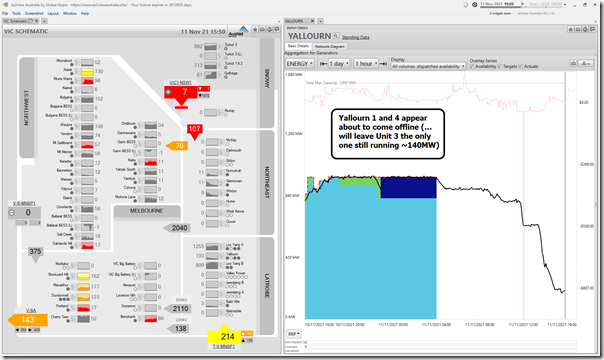 The fire started around 11:00 NEM time (see below), and it appears now that:

1)  Yallourn unit 2 has been offline since 18th September (so independent of this event) and seems not a factor in anything happening here:

2)  Yallourn units 1 and 4 have both been running down around 30MW for some time:

(b) I presume they must be running secondary firing (e.g. with fuel oil) in order to keep the flame stable at that level?

(c)  More generally, though, an interesting demonstration of coal unit flexibility … albeit not something the operators would really want to be doing all that often!

3)  Yallourn unit 3 is running down around 140MW which would be a more ‘normal’ level of minimum generation.

(B)  Statement from EnergyAustralia

EnergyAustralia statement on the Yallourn fire
November 11, 2021
At around midday on Thursday 11 November, a small fire began in the coal distribution facility at Victoria’s Yallourn power station.

The situation was brought under control and the fire extinguished within 40 minutes due to the automatic fire deluge system and support provided by fire services teams and the Country Fire Authority.

Employees in the immediate area were evacuated to a safe location while the fire was being extinguished. Importantly, all our people are safe and well.

The way all parties managed the situation demonstrates that our emergency services training and technical systems work as intended.

We continue to closely monitor the situation and a thorough investigation will be conducted.

Yallourn has four generating units. One unit is currently offline because of the major outage maintenance program. As a precaution, the three other units have been reduced to absolute minimum load while the conveyor system is being reinstated.

Their estimated return to service is this evening in line with the advice and the consent of WorkSafe Victoria, ensuring the equipment is safe to operate.

We thank our people for their swift action, and the continued support provided by the CFA and Fire Rescue Victoria.

There is no risk to energy security as a result of the fire.

Coming 4 months after the 30th July fire at the Victoria Big Battery, and 5 months after the (from 11th June) flooding at the Yallourn mine, it’s another reminder of the complex and interconnected nature of the electricity supply industry.

Fire continues at Victoria Big Battery into Monday morning (10:42am)

Monday’s update on the fire at the new ‘Victoria Big Battery’ – which seems to have mostly come under control by the afternoon.

A short update on Sunday 1st August 2021, about the continuing fire at the Victoria Big Battery.