Posted by David Leitch Monday, March 8 2021 Topic: Areas of deeper analysis, Impact of Coronavirus on the NEM from March 2020

This article looks at two topics. Firstly, we note that electricity is losing its share of energy consumption in Australia. That’s the exact opposite of what needs to happen for decarbonization. There is no single energy significant industry where electricity has gained market share in the past decade.

Secondly, going into an issue of interest only to some people, we look at the two main drivers of lower electricity demand this Summer compared to last Summer – that is cooler weather and population growth falling off a cliff. Without getting definitive our feeling is that Covid stopping immigration is as least as important as the cooler Summer. Its likely Australia will lose two years of immigration representing a permanent loss of electricity consumption. Hot Summers on the other hand will be back.

Australia’s energy consumption in FY 19 in PJ  is shown below. 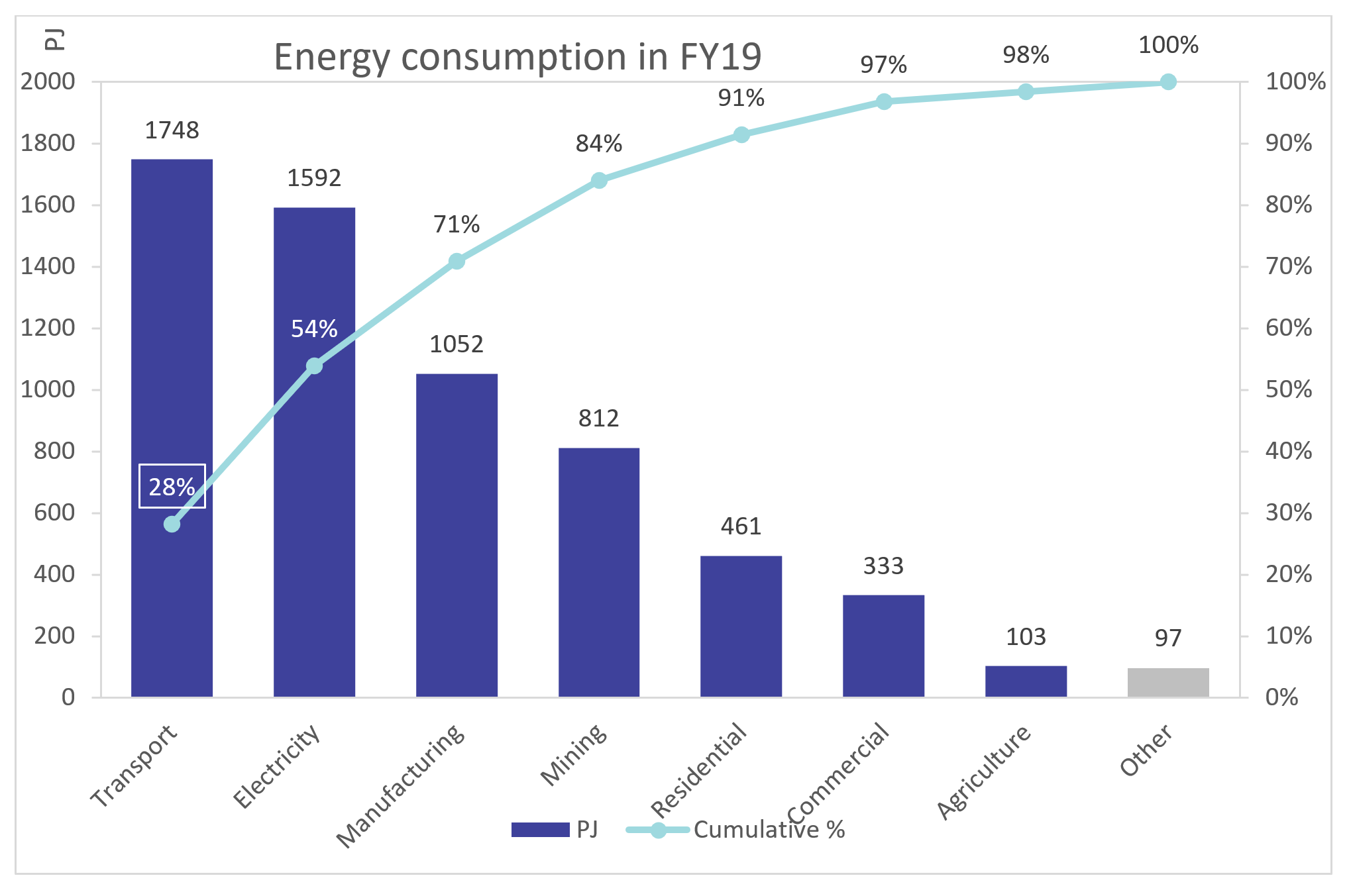 85% of Australia’s energy consumption is in transport, electricity, manufacturing and mining.

Between 2003 and 2019  total energy consumption has grown 34% and electricity has lost about 2% market share to gas and oil.

Looking a bit closer at the numbers just over the past 10 years, electricity hasn’t gained energy share of any sub-sector of any size. The figure below covers 88% of total energy consumption. The biggest sectors and the ones with growth eg mining, road and air transport have low use of electricity

So this idea that we will decarbonize by electrifying heat and power is so far just an idea. Coal has also lost market share but gas has gained. Enough already. 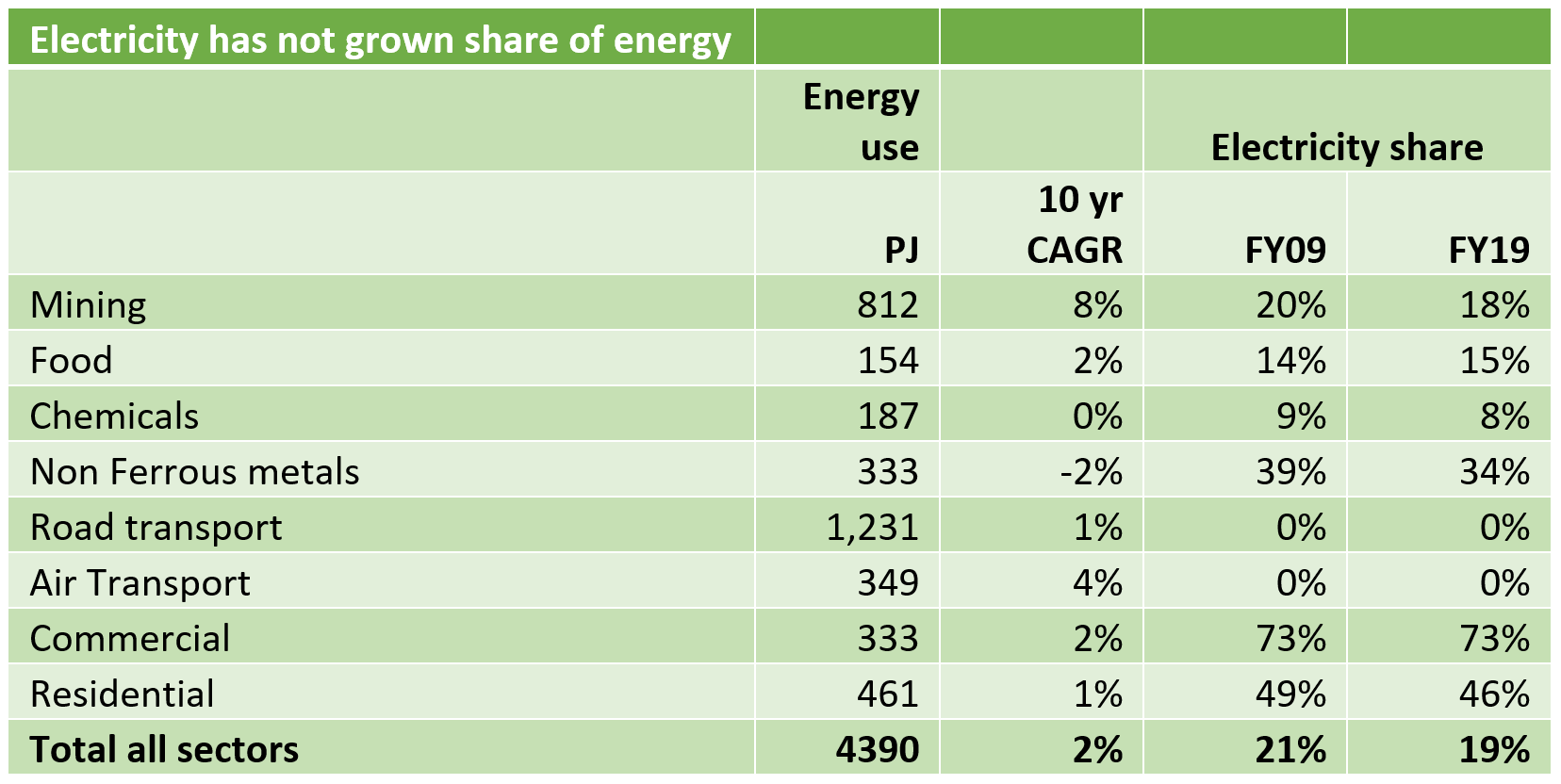 Operational electricity demand is a touch lower than in 2014

By and large operational electricity demand is lower now than it was in 2014, but GDP is say 29% higher and population maybe 18 % higher. Behind the meter supply , and energy efficiency, particularly in the built environment, are the basic drivers, as well as the aforementioned loss of share by electricity.

AEMO is the starting point

We consider AEMO’s forecasts to represent the consensus outlook for electricity demand. AEMO considered demand in detail, breaking it down into various sub-sectors and considering each segment individually including employing consultants as required.   As such in considering our own (ITK’s) forecasts it’s incumbent on us to start with AEMO’s forecasts. AEMO’s forecasts go further than 2035, as do ITK’s but for this note 15 years seems long enough. 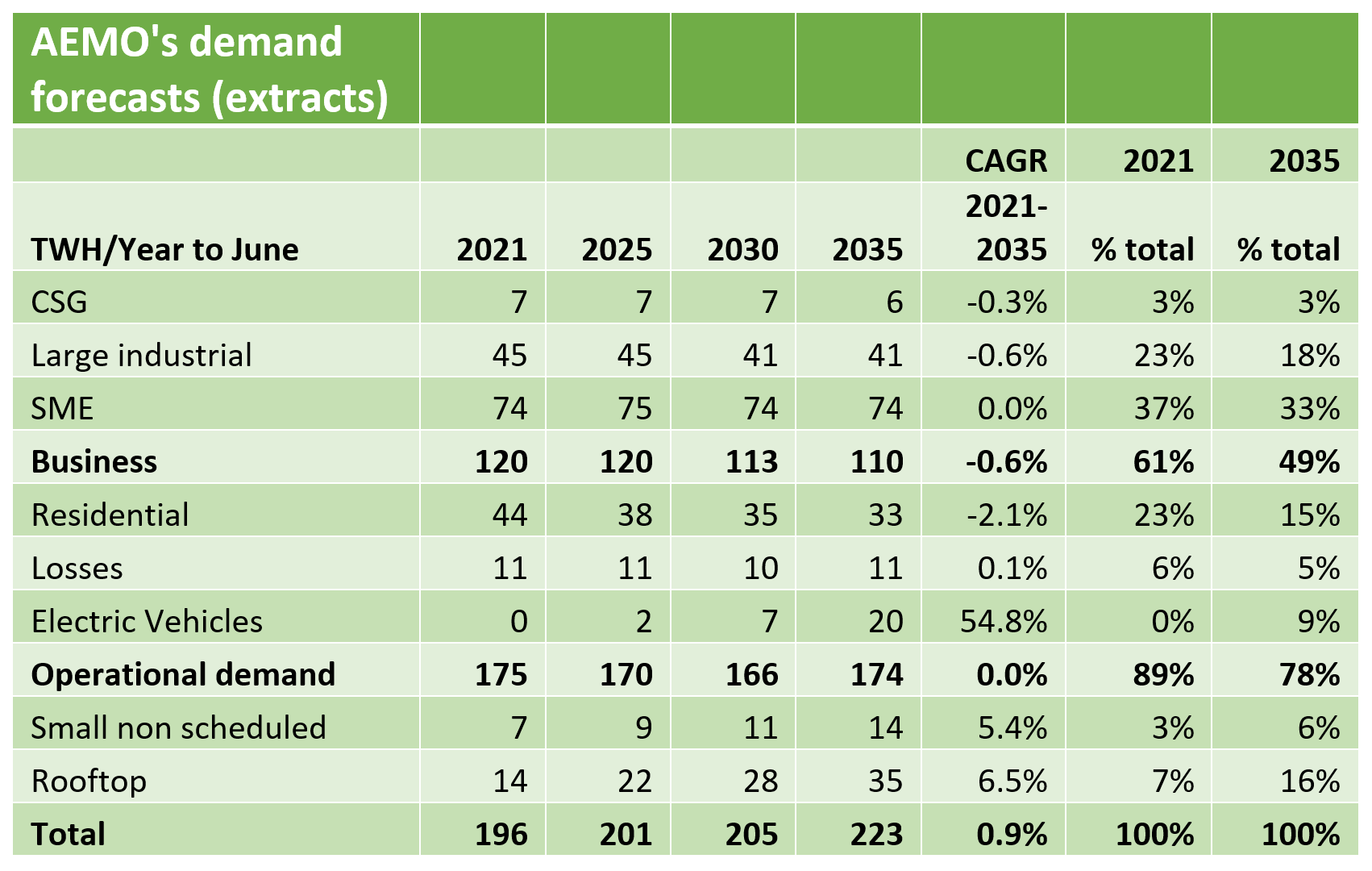 There are many things that interest me in this table but for this note, 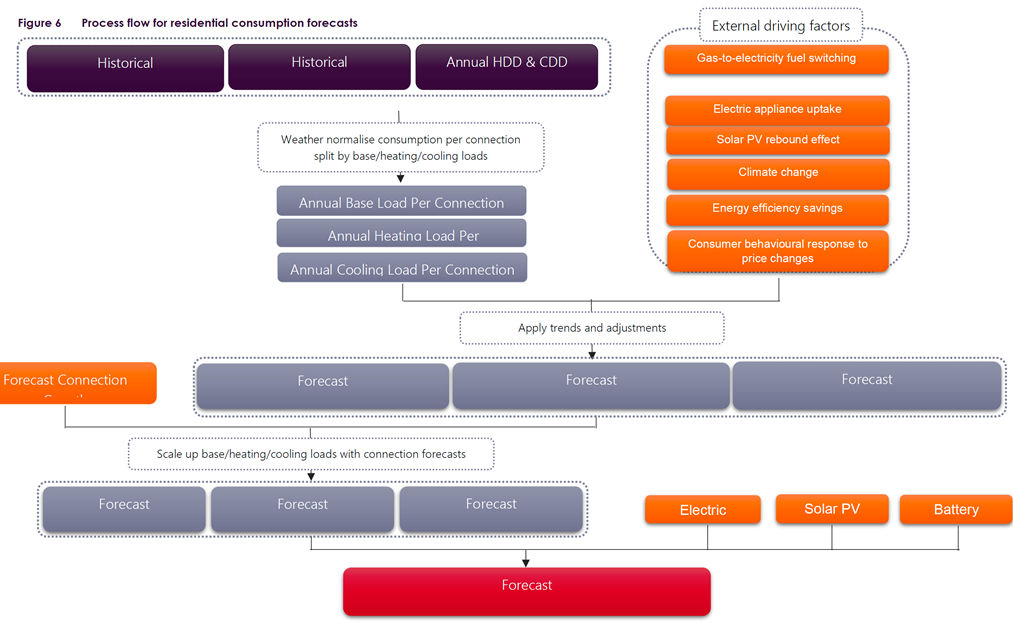 And in terms of electrification of heavy industry and or including hydrogen manufacturing, there is essentially no forecast. That’s OK, it would be a brave forecaster to put something in and it would entirely be a guess.

Demand is particularly soft at the start of 2021

By time of  day using NSW  we see in MW the biggest gap is in the late afternoon but in percentage terms, the gaps are in the early morning and late at night, as much as 10% for some half hours. This figure uses total demand, ie including AEMO’s estimate of rooftop, and on average this shows a more startling 7.4% reduction. This does lead me to think about whether AEMO is missing some of the rooftop numbers due to the speed of the recent build-up. 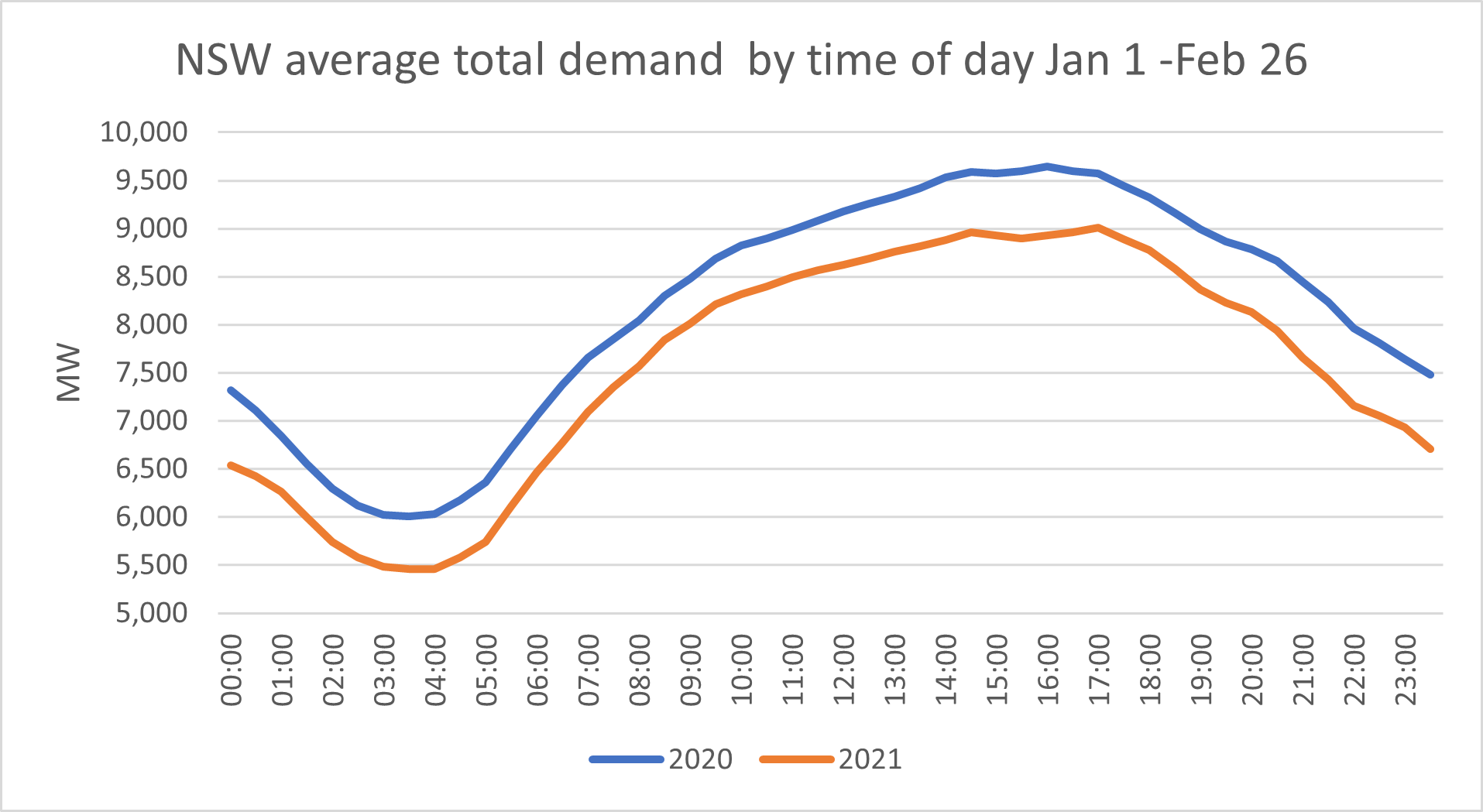 Immigration has been adding about 1% per year to the population and when there is negative net migration we would look to a permanent fall in residential consumption as it’s unlikely we will double the immigration rate to make up for the lost migrants over 2020 and 2021.

Australia has had a relatively fast-growing population for a developed country. The population in 2020  has grown about 70% from 1980 with the growth rate has been as high as 2% per year on year at times and a relatively steady 1.6% per year in the past decade.

In recent years there’s been about 0.4 m per year added to the resident population, plus increases in things like students. Of the 0.4 m about 60% had been coming from net migration. The latest data is only for the quarter ended June 2020. In that quarter population growth was negative and I think it’s reasonable to assume that has continued for the last 8 months, so in the graph, the June quarter is the actual number multiplied by 4 whereas all the other data points are a rolling four-quarter total.

A first guess would be all else being equal that residential electricity consumption changes with the net change in immigration. You could mount lots of arguments about why it might be a bit more or less but…. For SME eventually, a similar relationship would hold, immigrants consume goods and services in the same way as everyone else.

In short at a rough guess, we think the fall in immigration might knockdown electricity consumption by about 0.9%.

Could AEMO be underestimating behind the meter supply?

Demand is ultimately unobservable directly and in practice is calculate as utility supply (adjusted for auxiliary and line losses) + estimated behind the meter production. In turn behind the meter, production cannot be directly measured, or at least only that part of it that is not self-consumed can be measured. In practice, we understand there is something like a sampling process where the output from a series of installations of known capacity is measured. Given the sample output, it’s simple enough to scale up for installed capacity. However, even understanding producing capacity is also an effort.

As the APVI states:

For this reason, the data for the more recent months understates the number of actual installations. In the graphs below, an estimate is made, based on historical reporting patterns, to account for the time difference between systems being installed and appearing in the database.”

The point is that when the pace of installations accelerates, or even if there is a change in reporting patterns by installers to the CER its possible that the range of error in AEMO estimates of behind the meter lag the actual. Were that to be the case demand would be underestimated as would the share of demand being met by rooftop PV.

Returning to what’s happening in 2021 compared to last year the following table looks at the half-hourly average temperature at three airports, Sydney, Melbourne, and Brisbane. I’ve shown a percentage change measure in the full knowledge of the problems with doing that when temperature measurement is concerned. By just looking at January through mid-February there is less need to think about cooling degree days. It’s also worth bearing in mind that the March quarter is typically the period where high temperatures can simultaneously cause spikes in demand and falls in supply and that electricity demand falls away strongly as the March quarter proceeds and we get through the worst of the heat and humidity. This year the spikes never came but that is barely detectable in the averages 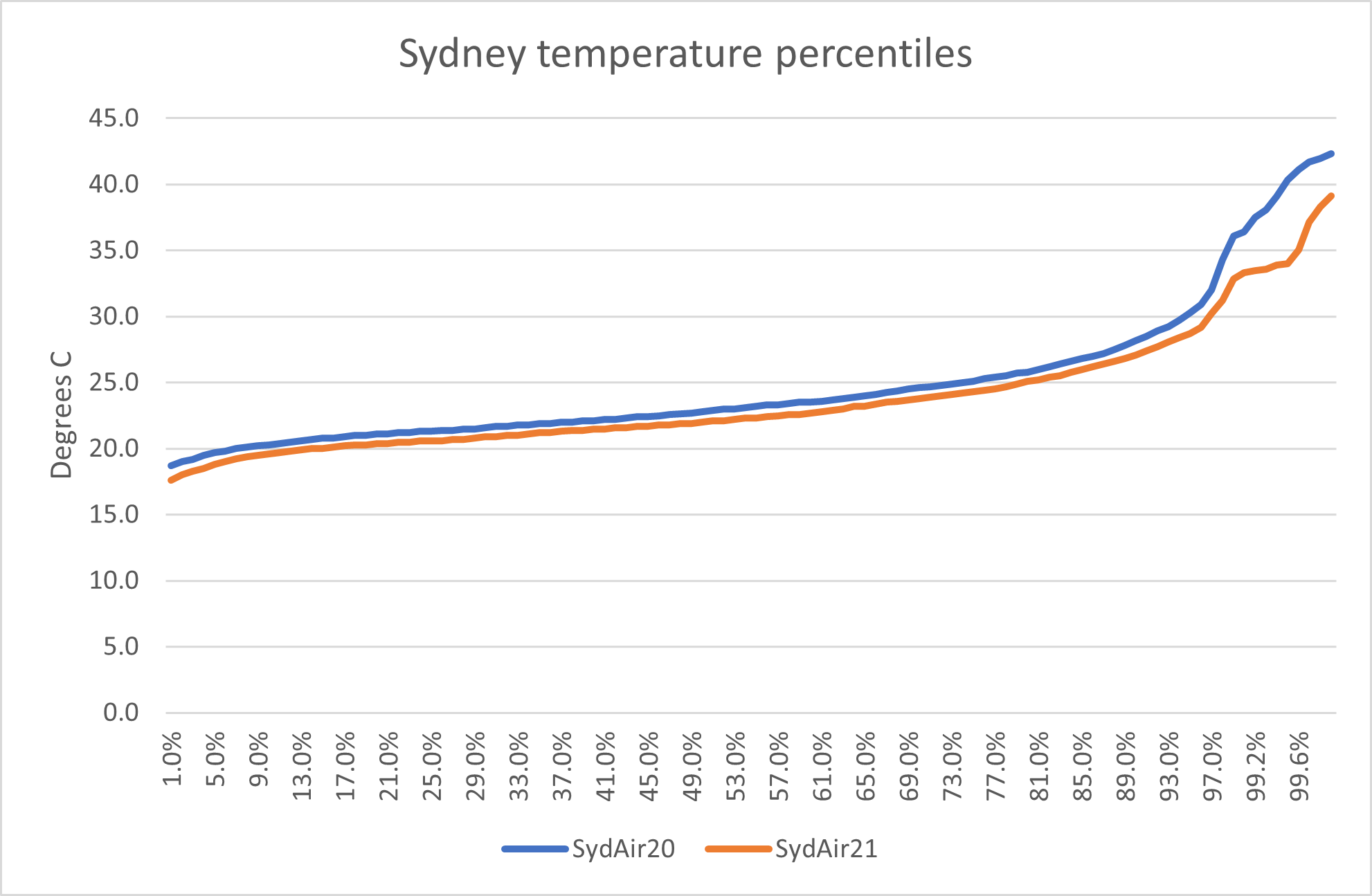 In Brisbane though it was cooler weather most of the time and less about the extremes. I guess this reduces air-conditioning load. 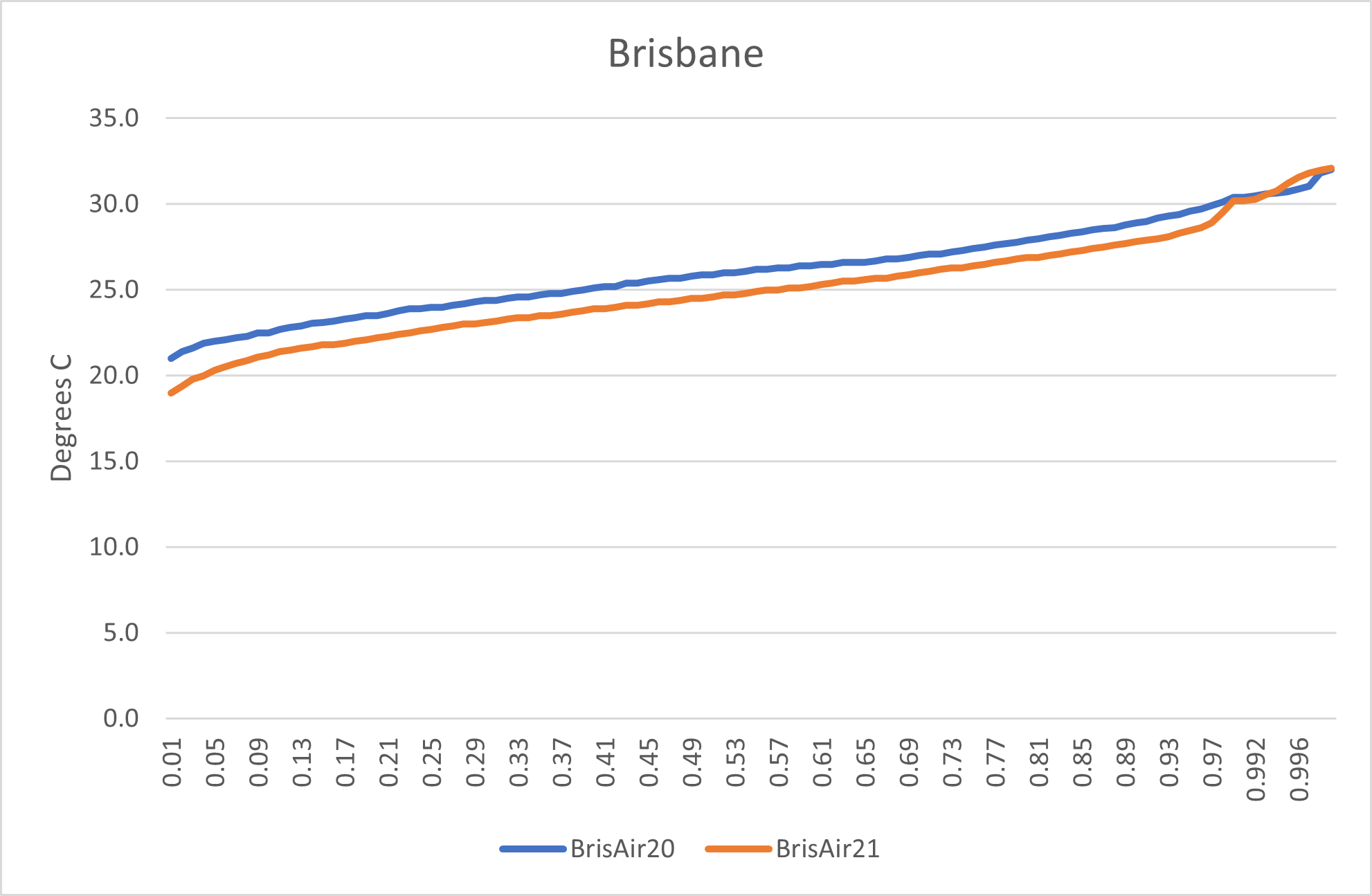 Finally, we see that Melbourne is similar to Sydney with the added twist that in 2021 there were less cool periods, potentially reducing heating demand, (in our house temperatures below about 16 C result in calls for warmth, no matter my view that 20  starjumps, a coat or jumper is cheaper and  better for the environment) 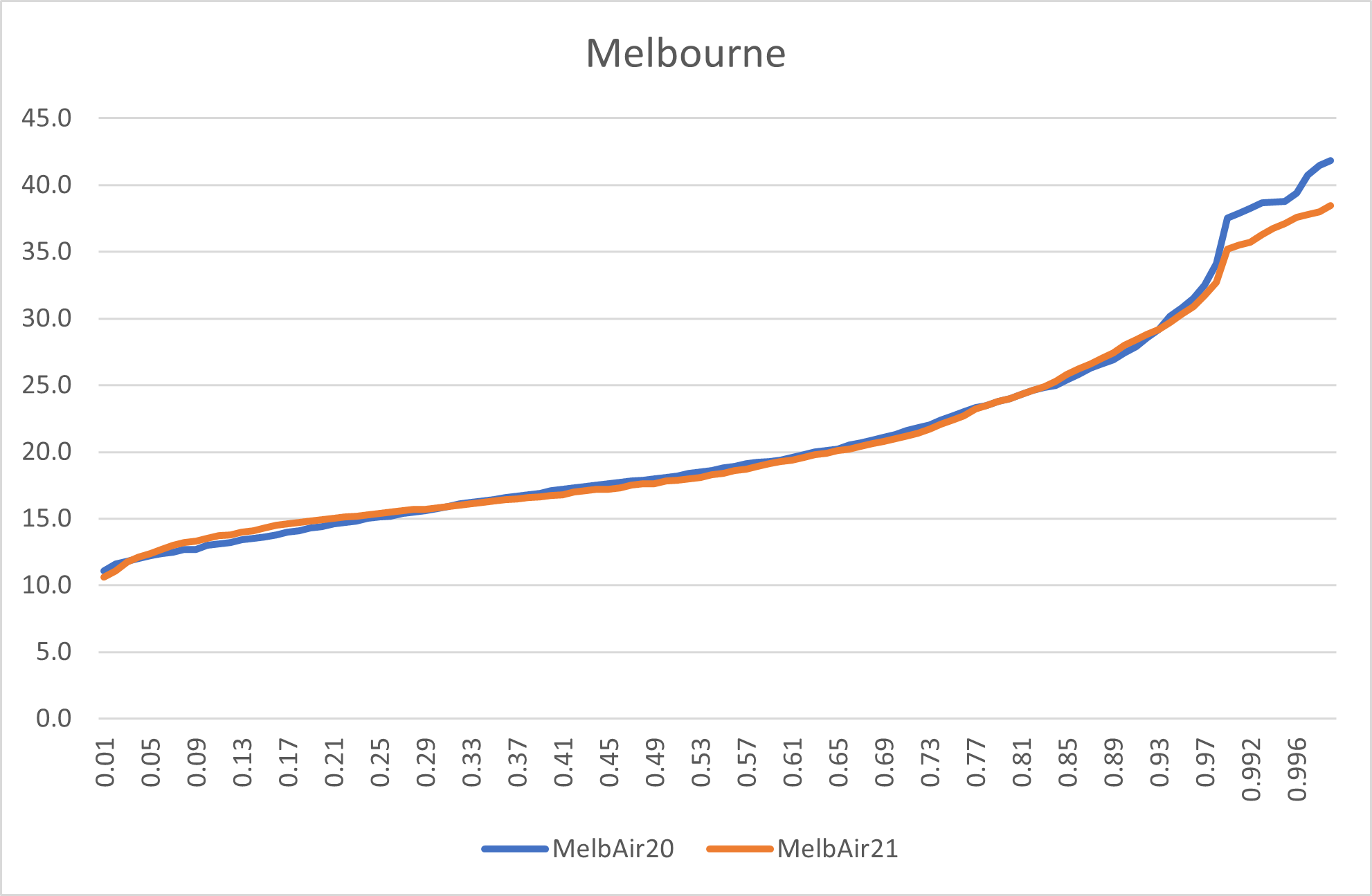 In short without doing a more formal analysis, I’d conclude that a milder Summer has contributed to lower electricity demand but the decline in population growth is likely to be as least as important.