Global Roam and Greenview Strategic Consulting have released the third edition of the Generator Statistical Digest (GSD2020).  The digest contains a comprehensive 10-year set of monthly data for every registered generating unit in the NEM that operated in the 12 months ended December 31, 2020.

The information is presented in a clear and comprehensive fashion with full and useful explanations of all terms.  For those liking reference works the glossary alone is valuable.

If there is an area for improvement, it’s finding a way through the herculean task of quantifying behind the meter generation.

It’s a pleasure to highlight a few of the data items that emerge from this year’s digest and I’d like to thank the publishers for making an advance copy available for review.

In electricity most of the time the desire is to maximise profit, not to top some arbitrary list. Occasionally the purpose is to provide insurance or portfolio value.

However in looking through some sorted lists from the GSD its nevertheless interesting to highlight a few items.

The first of these will be no surprise and that is how batteries are dominating the FCAS market.   And that’s today’s FCAS market.   The markets for future FCAS, when AEMO and the AEMC finally realise that a new control scheme is required for the NEM as we move towards a dominance of inverter-based supply, will likely be completely dominated by batteries or other energy storage.  Even gas which is in second place this year will possibly struggle to keep its role in FCAS when 5-minute settlement takes over. 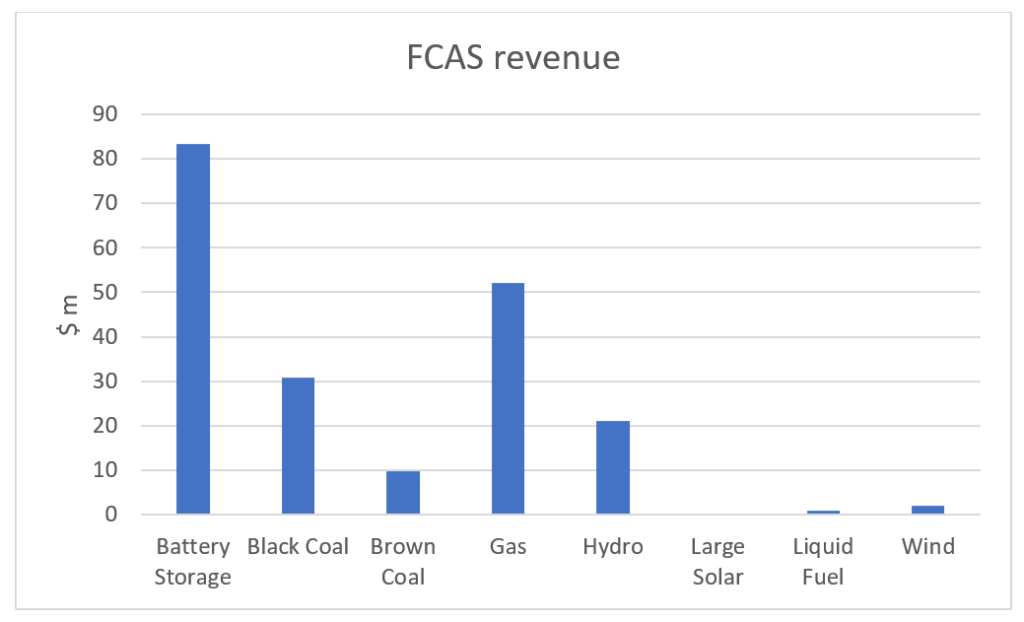 Hornsdale was the largest FCAS earner and South Australian based suppliers dominated but this will change as more batteries are installed in other States.  Of the coal generators Vales Point has been the main FCAS supplier in 2020.

Next we turn to capacity factors and these are just lists so we need to be careful about observations.

Just two black coal stations managed over a 70% capacity factor in 2020, Kogan Creek an excellent 78%, and Bayswater Unit 1, 71%. Kogan Creek was the only QLD station to make the list.

By contrast 5 units of brown coal achieved 80% or better – putting 2019’s troubles behind them.

In analyst spreadsheet  models, of which I do many, solar farms are capable with a high DC/AC ratio of getting to a capacity factor of 30% or even 32% and wind farms in the low 40s.

However in 2020 the best solar farm capacity factor was 29% (achieved by Rugby Run and Griffith) achieved only 29% – and in joint 5th place at 27% were Numurkah, Bungala 1, and Ross River.

Of the wind farms, Windlab’s ability to pick winners showed up as the small Kiata windfarm achieved the No 1 ranking (45%). It is usually in No 1 spot.  Not many Wind Farms managed a 40% or better capacity factor in 2020, with the others being:

Then lets turn to constraints.

The data clearly shows that black coal and brown coal are not significantly constrained with Stanwell unit 2 constrained for 675 hours 7.8% by contrast Pelican Point, a gas station, was constrained for 2078 hours (23% of hours in a year) and Brigalow (Maryrorough) solar farm for 2025 hours.

Worst though was wind with the unlucky Mt Emerald Wind farm constrained for 2410 hours (27.5%), Murra Warra 2356 hours and on down to No 5 spot Crowlands which was still facing 1304 constrained hours.

In ITKs opinion there needs to be a balance between:

Nothing points to the benefits of Renewable Energy Zones like good wind and solar farms being constrained for ¼ of the year.

In looking at the output data (that is the total volume) there are some obvious conclusions, namely each coal unit tends to have a lot of volume, with Kogan Creek being the biggest producer in the NEM at 5.3 TWh (or 2.5% of total NEM wide production).

There are also some surprises.

For instance Coopers Gap, despite being not fully commissioned during the year was the largest wind producer (close to 1 TWh) and well ahead of the Sapphire and Macarthur wind farms. Once again Coopers Gap was a site identified by Windlab.

The highest producing solar farm was Daydream, but at 0.35 TWh it’s still a minnow compared to the coal generators. Still that’s not the way to think about solar. As the behind the meter industry shows, its the collective not the individual that matters for solar panels.

Finally we turn to price.

These are VWA Price, which is:

Unsurprisingly, at least to me, was that the five worst VWA Prices were all recorded by solar farms with Yatpool receiving $15.93/MWh on average for its output (and that’s not taking into account the MLF).  Solar LCOE is low but not that low.

There were a number of things in the table that would be interesting enough to examine further. In no particular order: