I’ve been thinking that it’s probably not been a great week for AGL Energy given the number of units that have been offline at Bayswater and Liddell through these few days of volatility.

However an ASX Release this morning titled ‘Liddell Incident’:

1)  speaks of ‘a transformer incident at Unit 3 of AGL’s Liddell Power Station’, and confirms that this week is not a great one for the company;

2)  though it is surely an even worse week still for the person who was ‘seriously injured as a result of the incident and is receiving medical attention’.

Hence I’ve had a quick look this morning (in a rush, so may well have errors etc…)

“On a precautionary basis, AGL has informed the Australian Energy Market Operator that the length of the outage may be up to two and a half months, subject to the completion of this assessment. AGL notes that this estimate is highly preliminary.”

… so, given we are working on this particular new widget as part of the version 8 upgrade to ez2view, I quickly pulled it out to have a quick look in this snapshot earlier this morning: 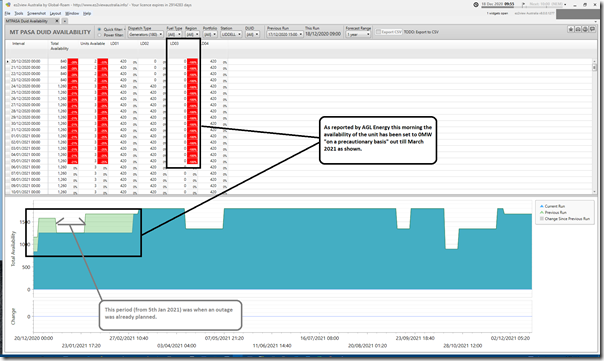 It shows that the unit’s now scheduled to be unavailable out till the start of March … but that it had already planned to be on maintenance for a few weeks in January anyway.

Using a couple other widgets in ez2view, we can have a quick look at what happened yesterday with the benefit of the larger ‘Next Day Public’ data set from the AEMO.

B1)  Looking at LD03 in ‘Unit Dashboard’ widget

Here’s the three dispatch intervals that counted … in the table on the right of the ‘Unit Dashboard’ widget focused on Liddell Unit 3: 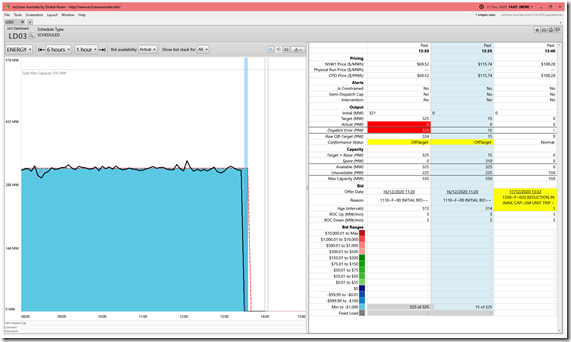 Tips for ez2view users:
Note that:
(a)   the ‘now’ point of the window is set at 14:05 in Time-Travel,
(b)  but the context of the table is shifted a little earlier by clicking on the 13:35 dispatch interval (and in this way all 3 columns show actual historical data, not forecasts at the ‘now’ point)

In the 13:35 dispatch interval (i.e. we see received at 13:32 at the AEMO) we see the rebid submitted citing Unit Trip in the rebid reasons

For the 13:40 dispatch interval, the availability is set to 0MW by the rebid…. which also means the 2 intervals beforehand would have been determined as ‘Off Target’ in the ‘Raw Off Target’ calculation AEMO uses for evaluating Conformance Status.

Here’s a view (still with ‘now’ being set at 14:05 in time Travel) of how dispatch prices unfolded in NSW over the half hour beforehand: 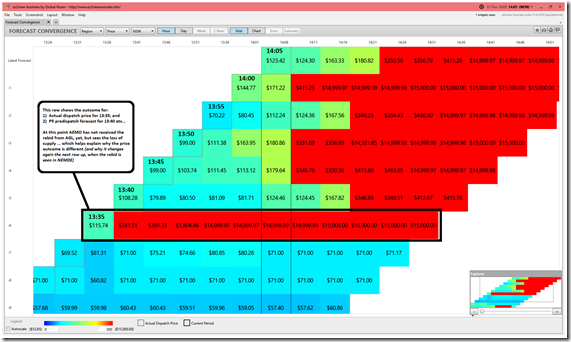 We can see in the grid above that there are three states:

2)  After the trip but before the rebid

The trip will certainly have been one of the factors that delivered the price volatility (and triggering of RERT) yesterday.

I also note coverage of the incident as follows (as at 11:00 NEM time):

3)  By Michael Mazengarb in RenewEconomy under ‘Liddell unit out for summer after transformer failure injures worker, triggers RERT’

… these and other articles will be tagged into our expanding Asset Catalog (which has grown out of the earlier Generator Catalog).

A short look at this afternoon’s pricing volatility in the South Australian region with what appears to be coincident trips at 2 related Large Solar Farms.

With another upsurge in interest in the effect of Hazelwood closure on price outcomes in the NEM, we’ve invested some time to provide these thoughts.