It’s understandable that much of the attention’s been focused on the Queensland region, and particularly the ‘will it exceed the CPT again?’ question.

But it’s important to note that there’s activity happening elsewhere as well, such as a decent run of volatility this morning in South Australia, some of which was captured in this run of SMS alerts: 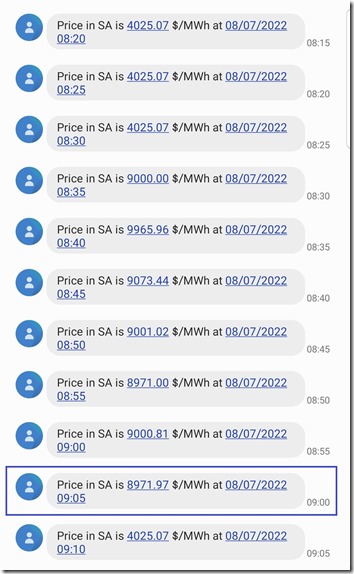 I thought I’d take a quick look at the 09:05 dispatch interval highlighted above … as the last of the prices before they began to drop.

Here’s that dispatch interval in one of the SA starter windows in ez2view v9.4.2.82: 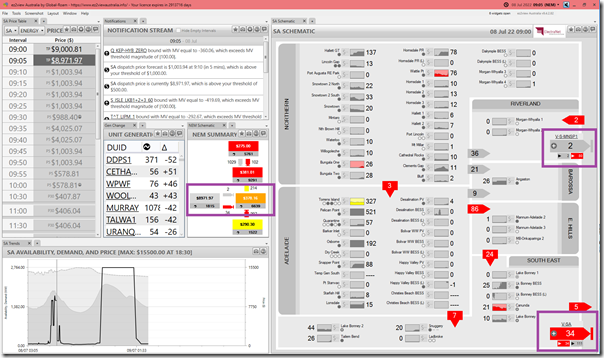 There are many things that could be noted from this snapshot, but keep in mind three big ones:

1)  It’s only a moderate amount of wind production across the state at this time;

2)  As a result, supply from dispatchable plant (gas, liquid, batteries) has cranked up;

3)  Despite the price difference between VIC and SA, both the Heywood and Murraylink interconnectors are transferring power east towards (lower priced) VIC region.

Looking further we see that this is because of an outage on the Heywood to South East 275kV line, which AEMO models in NEMDE via the ‘I-HYSE’ Constraint Set … and we note that the outage is currently scheduled to run through until Saturday evening … and then again for part of Monday.

Using the new ‘Constraint Dashboard’ widget, here’s a view of how this has been trending: 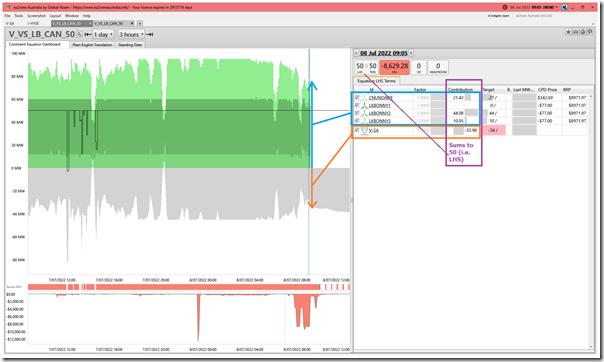 Because it’s relatively windy in the south-east (and the combined output of Lake Bonney and Canunda is >50MW) this squeezes surplus flow east via Heywood.  In the ‘SA Schematic’ snapshot in the first ez2view image above we can see what’s limited between the South-East zone and further north into the Adelaide zone.

An unexpected network outage in the south-east of South Australia restricts supplies from Victoria at a time of low wind supply in South Australia and results in the dispatch price spiking to $14,200/MWh from 11:30 and oscillating for the afternoon