Images are doing the rounds on social media, so I thought I’d firstly jump to the Eskom website to confirm the incident on Sunday night just past.   This media release was published on Monday 9th August:

​Monday, 09 August 2021: Eskom wishes to inform the public that Unit 4 of Medupi Power Station experienced an explosion on the Unit 4 generator at approximately 22h50 on 08 August. The incident is suspected to have resulted in Unit 5 tripping.

No injuries have been reported and all employees and contractors have been accounted for. Emergency services attended to seven colleagues requiring treatment for shock. Eskom will continue to provide support to the employees who might have been affected by the incident through its Employee Assistance Programme (EAP).

Unit 4 was on a short-term outage (since 06 August) when the incident occurred, and all work on the unit was suspended with immediate effect. This included the suspension of all permits to work on the plant until further notice. The area was secured and once it has been cleared by the Fire Chief and resident engineers; inspections and assessments will begin to determine the cause of the incident and extent of the damage caused.

Preparation for the return to service of Medupi Unit 5 is currently in progress.

Investigations are underway into the cause of the incident and Eskom will update the public on developments, as well as to what extent will this unfortunate incident impact the national electricity grid.

… and this was followed by this ‘first update’:

​Monday, 09 August 2021: Eskom wishes to inform the public that Unit 4, which was on a short-term outage (since 06 August 2021) of Medupi Power Station experienced an explosion on the Unit 4 generator at approximately 22h50 on 08 August 2021. This explosion has resulted in extensive damage to the generator.

The incident occurred during the activity to displace hydrogen with carbon dioxide and air respectively, for the purposes of finding an external leak. Fortunately no injuries were sustained by personnel who were on site during the unfortunate incidents.

Following the power station preliminary investigation, it appears that while performing this activity air was introduced into the generator at a point where hydrogen was still present in the generator at sufficient quantities to create an explosive mixture, which ignited and resulted in the explosion. It also appears that there was a deviation from the procedure for carrying out this activity.

As such Eskom has undertaken to place those employees who were responsible to manage and execute this work under precautionary suspension pending the conclusion of the Major Event Investigation.

Investigations are underway into the cause of the incident and Eskom will update the public on developments, as well as to what extent this unfortunate incident will impact the national electricity grid.

(A)  Commentary on social media

This thread on Twitter by Chris Yelland provides some interesting details: 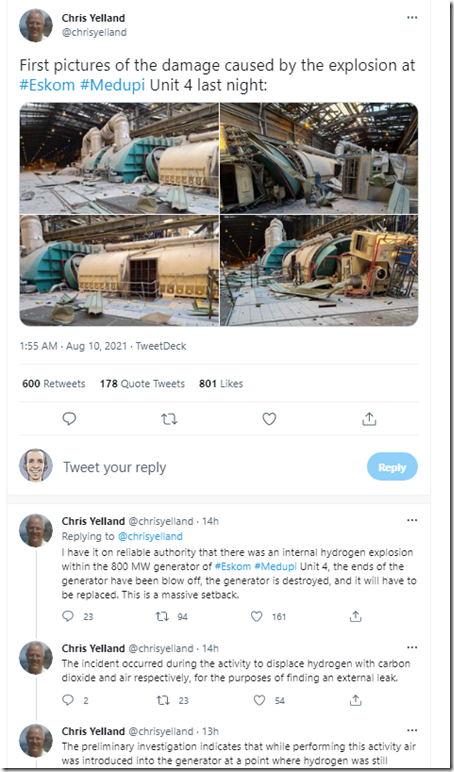 Particularly at the bottom of the thread, readers here might be interested to the link to this article in Power Engineering describing how ‘Hydrogen cools well, but safety is crucial’.  Given Eskom have already noted that hydrogen explosion is the probable cause (in the ‘first update’ above) it seems useful to link people through to that article.

No doubt there will be coverage elsewhere as well.

(B)  Similarities to Callide B4?

There clearly is at least one similarity between what seems to have happened with the Callide C4 Catastrophe … and that is that there’s a huge amount of damage (compare the images above with the photo that’s done the rounds of Callide C4 (such as in the AFR on 2nd June 2021) – and was first published by CS Energy here on 2nd June 2021: 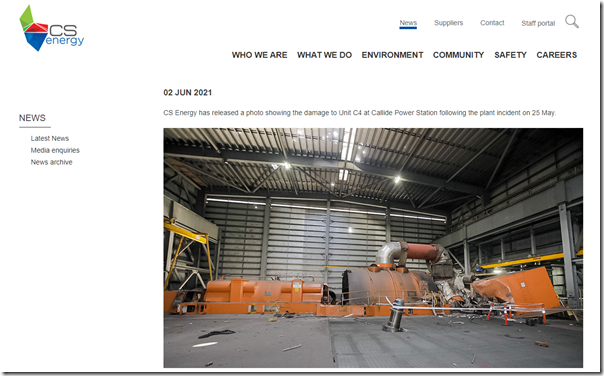 However readers should use caution in drawing other links – for instance, there was speculation after the Callide C4 incident that hydrogen explosion was involved.

Dr Sean Brady was appointed to lead an independent investigation on 11th June 2021 – and (as far as I know) nothing has been concluded, yet, as to what caused the explosion at Callide C4.  It might be hydrogen-related … but it also could be due to a number of other factors …

Both units trip at Callide C on Wednesday 13th January 2021

A pretty rare event in the NEM, when two units trip simultaneously … so a short article on WattClarity as a result.

On Friday evening (28th May) and again this evening (Sun 30th May) my phone buzzed plenty of times – due to price volatility, and also alerting on low IRPM (enabled with Callide units offline, and low wind harvest at peak demand time).